On the Road Again

After leaving the beauty that is Matera, we headed out in our tour bus toward Naples.  As we made our way through the Italian countryside, we passed many waterways and fertile green hills. All of a sudden, as we crest yet another hill, the Bay of Naples comes into view along with a view of the imposing mountain known as Mount Vesuvius.  My heart began to beat faster with excitement.  THIS is what I’ve been waiting for my whole life. 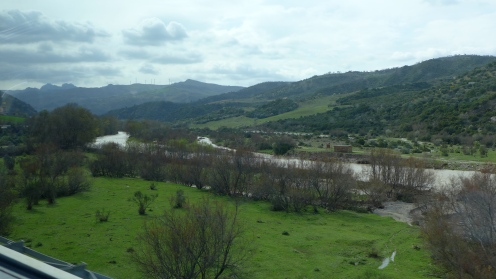 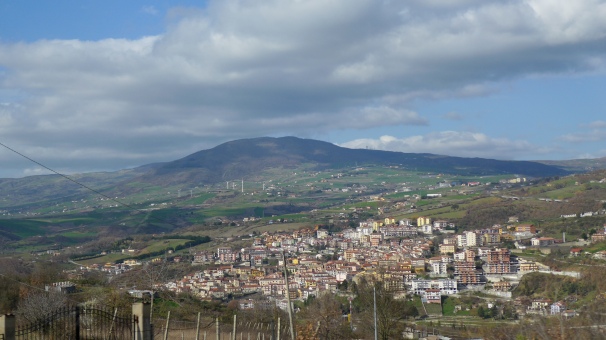 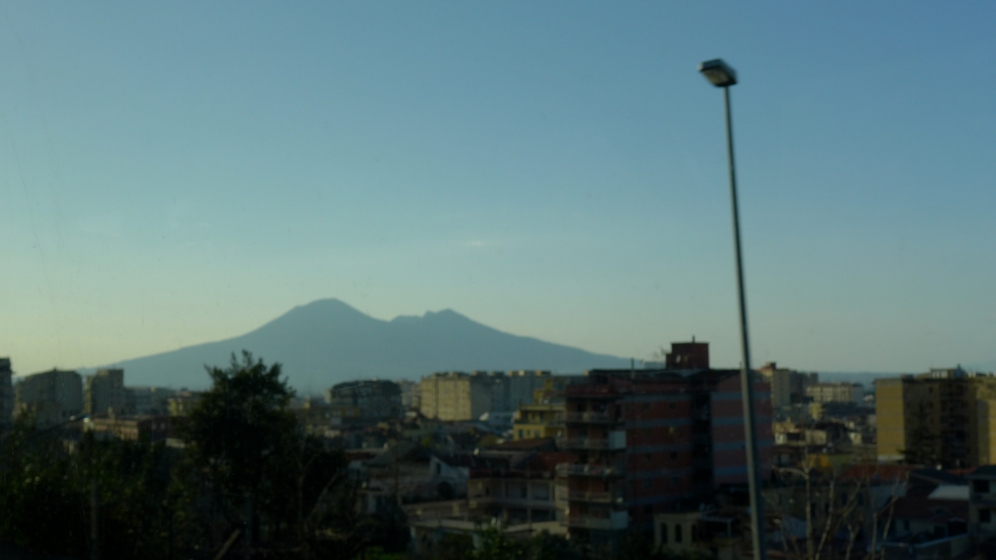 And then, we arrive in the city of Naples and I am feeling a sense of dread at my first up close impression of the city. As we drive through the city on our way to our hotel, we see dilapidated buildings, homeless people, trash, dirt and grime. As we get closer to the city center, you could tell that the majority of the buildings were built during the reign of Mussolini and that they were not well maintained over time. Naples was a slum and I was not impressed. This was my least favorite city of the entire trip.

A Shining Beacon in a Land of Darkness: View from the Hotel Terrace

One of the few saving graces of Naples was the view from the hotel Terrace. After checking in, my friend and I journeyed up to the rooftop bar in our hotel.  From the rooftop, we had a clear view of the Bay of Naples, Castle Nuovo, Galleria Umberto I and of Mount Vesuvius. The view was absolutely stunning. 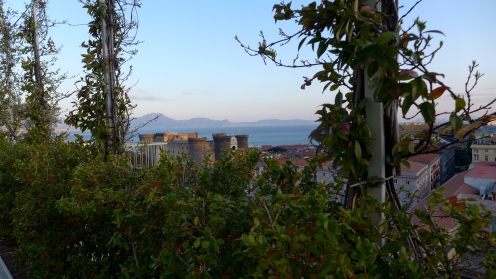 Based on this view, we decided to spend our free evening walking around the city. We left the hotel without a plan and meandered through the crowded streets of Naples.

One of the first places we happened upon was the Galleria Umberto I. It was built between 1887-1891. This once glorious shopping center was meant to be a public space that combined businesses, shops, cafes and social life with private space (apartments on the third floor). The building was architecturally beautiful with its glass dome and four glass-vaulted wings. 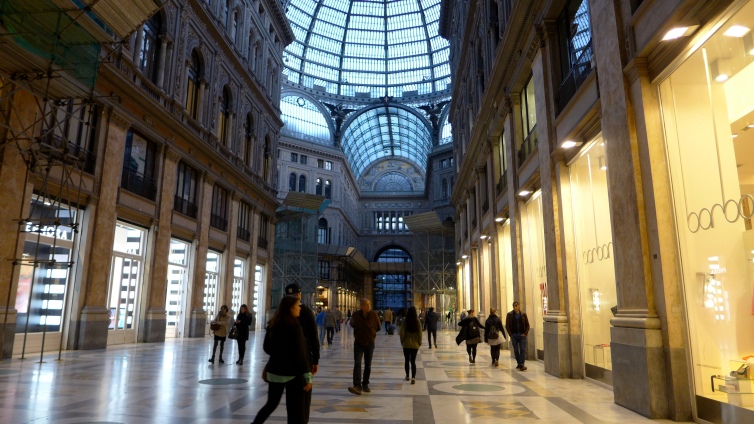 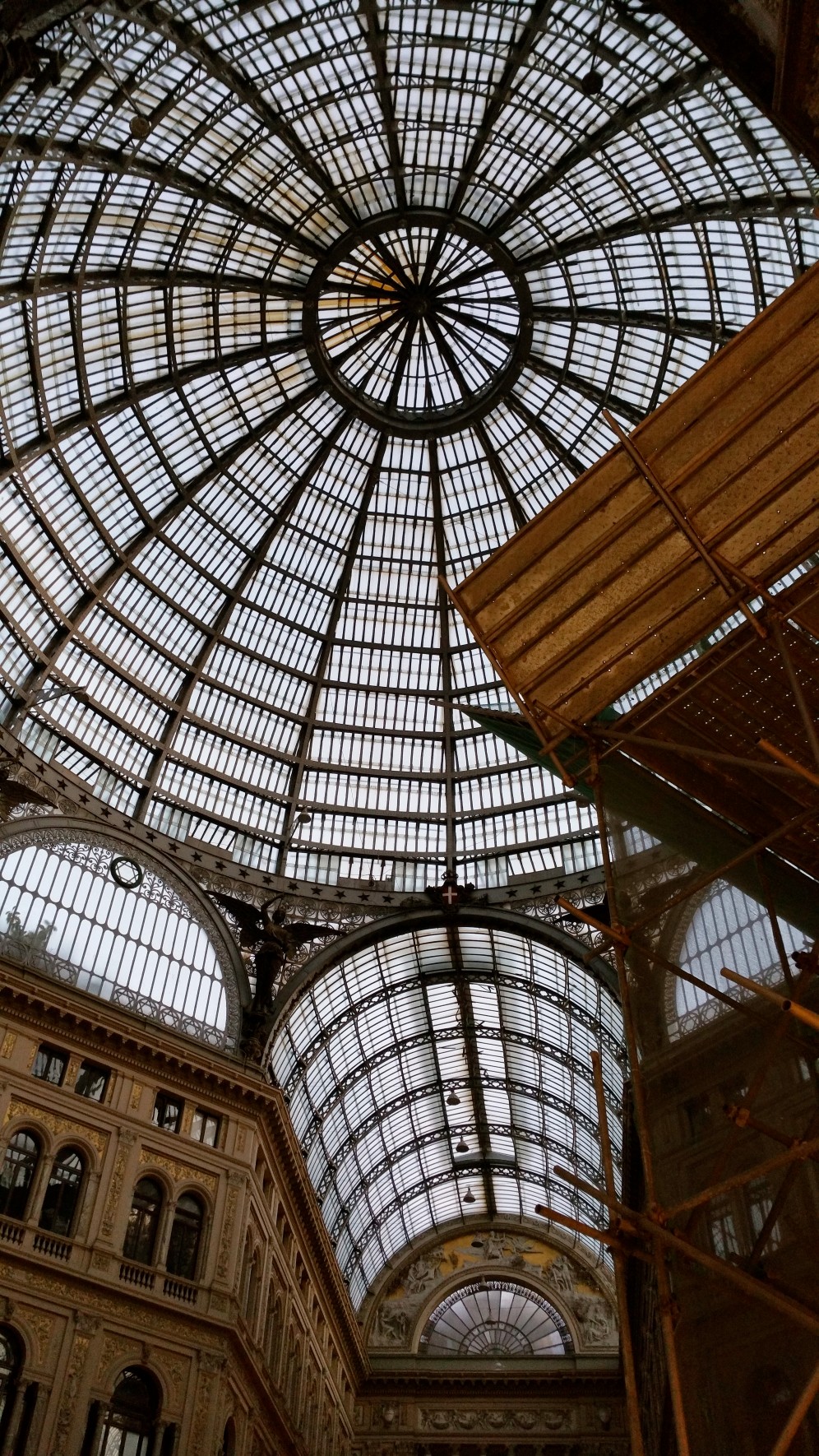 What we found was a sparsely occupied (business-wise and people-wise) thruway. Based on the scaffolding inside and outside the Galleria, we could see that attempts were being made to bring this architectural gem back to life from decades of decay.

The next place we stopped was the Castel Nuovo. This medieval castle, located in central Naples, was first erected in 1279. The marble triumphal arch, the doorway to enter the castle, was built in 1470 to commemorate Alfonso of Aragon’s entry to Naples in 1443. The most fascinating architectural details of this castle were the bronze doors and the carvings in the marble triumphal arch. 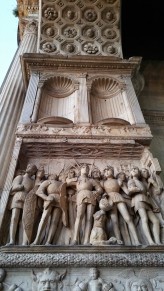 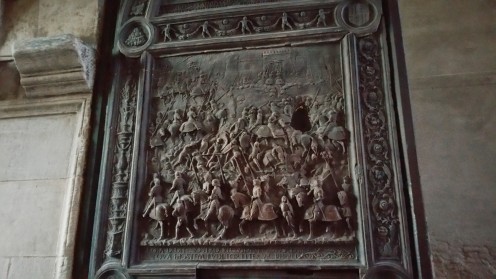 We only have the opportunity to see the facade and courtyard of this Castle due to its closing for the evening. My takeaway from this stop on our self-guided tour of Naples was that the facade of this castle is representative of the city of Naples: a city in decline and decay.

The other bright spot in our first day in Naples was dinner at Brandi’s. Our tour guide highly recommended this place for dinner and we had such luck with his recommendation for Oesteria AL Duomo in Barletta, that we decided that we would try Brandi’s out.

Brandi’s is located in a major shopping area of Naples on Salita S. Anna di Palazzo. Due to the mania of it being the center of the shopping district and the residual mania from the Pope’s visit, it was super hard for my friend and I to find the restaurant.  As a matter of fact, we must have walked past it at least five times before finding it tucked in a corner off the main street. However, once we arrived, it did not disappoint.

We started out with a bruschetta mare, a sampler of five different bruschetta’s that my friend and I shared. The sampler included octopus, olives, mozzarella, anchovy, arugula, olive oil, cherry tomatoes, and some other ingredients that I am definitely forgetting.  It was totally yummers!! 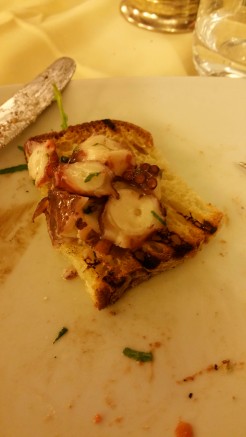 For our main course, we had the Margherita Pizza, which is one of the things Brandi’s is known for. It was delish. 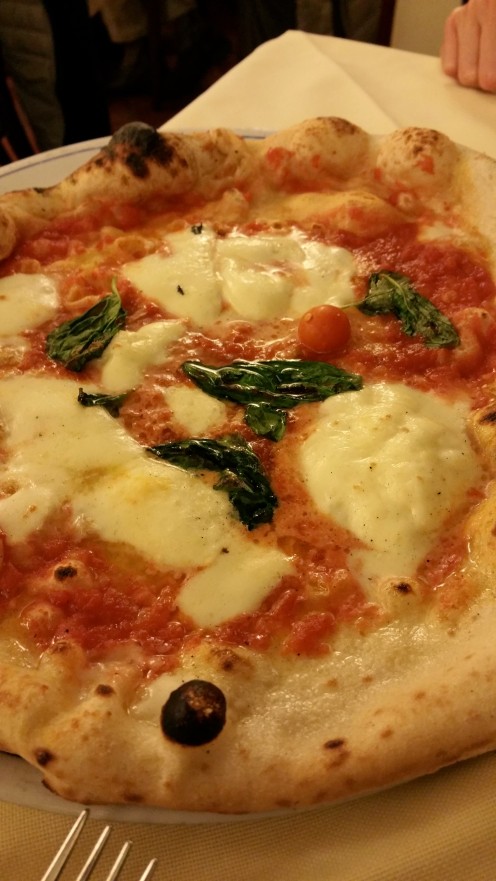 After that wonderful meal, we made our way back to our hotel.  We decide to go back to the rooftop for a cocktail and the enjoy the view. We ordered Shirley temples.

It was a solid end to a very shaky first day in Naples.